Posted on January 11, 2014 By fredayinafrica

What started as an SPLM party problem now affects everyone. This is now a South Sudan problem – Rev. James Ninrew (South Sudan) 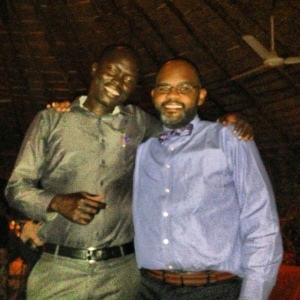 This is my friend and colleague John. It has been a joy getting to know John since arriving in South Sudan. We have had many debates and discussions on the future and direction of South Sudan. In addition, we have discussed the foreign policy of President Barack Obama, “Obamacare” and the tea party. John recently received an email from the Tea Party Express soliciting his assistance in helping the group meet their fundraising goals. It is fun debating with John because he always wants to get in the last word – which is interesting because we share the habit of having the last word on most conversations. Everyday John gives me grief about leaving the office at 4:30pm. His desk is at the office door so he knows who comes and goes…and at what time! I have tried to explain to him that living at AFEX, which is where our office is located, I am on the clock 24/7. But every day, he would smile and say to me, “heading home?”

The picture of John and I was taken at the IRI Christmas party held on December 14. That party now seems light-years away because the conflict started on December 15. I never had an opportunity to even download the pictures from my phone.

John has been on my mind since I was evacuated from South Sudan. John is a member of the Nuer tribe, the tribe associated with the former Vice President Riek Machar and his anti-government forces. With little evidence and absolutely no legal authority, the soldiers of the pro-government forces began rounding up Nuer citizens in Juba when the conflict started. In some cases, they killed Nuers on the spot, no questions asked. Others were imprisoned. In other parts of the country, anti-government forces targeted Dinkas in retribution, killing them on the spot. John escaped both imprisonment and death and sought refuge at the UN compound in Juba. David, another colleague who is also Nuer was not so lucky. He was imprisoned with other Nuer tribe members. His account of his time in prison is both horrifying and depressing.

During his imprisonment, pro-government forces would position their guns in the windows of the jail cell and indiscriminately fire their guns at prisoners. Many were killed but David survived because he was buried under his fellow prisoners who were shot and killed. He was eventually released and fearing for his life, sought refuge in the UN compound, where he also sought medical attention for gunshots he sustained.

It truly breaks my heart and brings tears to my eyes to think about what John and David (along with others) are enduring in South Sudan. South Sudan is their home but the government has failed to protect its citizens. John and David are young South Sudanese citizens working to move South Sudan towards democracy. Sadly they are now causalities of a brutal conflict that has engulfed the entire country. What started as a political conflict has opened old ethnic wounds. John and David now live in squalor-like conditions in a UN compound that is overrun with refugees seeking the safety of the international world. I can only pray that once this conflict has ended and South Sudan is moving towards peace, that John and David will hold no grudge or ill-will towards the men perpetrating these atrocities. The question that is asked over and over is “can South Sudan find a peaceful solution to this conflict?” Honestly, I do not know.

South Sudan has faced stiff odds before, but the majority of the country was united against a common foe – Sudan. Now, the nation has splintered along tribal lines and faces a significant uphill battle to bring an end to a deadly political situation.  Peace talks have begun in Addis Ababa, Ethiopia but the outlook is bleak because some very important institutions are not seated at the negotiation table. I, along with the wold will wait and see what becomes of the newest country to join the international world.

An article on the UN compound in Juba. http://www.arabnews.com/news/505736

← My Musings about the BCS Championship Game
The Cost of War →