Please find below a blog I co-authored regarding the recent elections in the Nigerian State of Ekiti.

Ekiti state is rather small state for Nigeria standards, with an approximate population of 2.8 million, the state is situated in the South West (SW) geographical zone.  For the past month, the state has held the attention of the entire nation.  The SW is an opposition stronghold, governed by the recently formed All Progressive Congress (APC) party. Usually, gubernatorial elections in Ekiti are quiet affairs, but this time the international community was carefully watching the election process, trying to predict trends for the upcoming Nigeria national elections in February 2015.

The creation of the APC has set into motion what many people are saying will be the most contested and sensitive elections in recent Nigeria history.   The ruling People’s Democratic Party (PDP) party has been on the offensive as they have been trying to break the APC stronghold in SW.  Both the PDP and APC needed a victory in Ekiti. For the PDP it was important to elect a governor in SW and for APC to tighten their grip on the SW. The stakes from both sides were high. All eyes were watching Ekiti last Saturday.

The elections were fairly peaceful throughout the state, with no major incidents reported. Voter turn-out was fairly impressive with about 47.9% as recorded by the Independent National Electoral Commission (INEC). INEC performed exceptionally well, opposed to their efforts in the last year’s Anambra gubernatorial elections. Unlike in the past elections, poll materials and personnel were deployed in a timely manner. This was the first election that Nigerians used the new permanent biometric voter cards. INEC officials in Ekiti learned their lesson from the Anambra election, where voters complained of missing names and election officers being absent. Though biometric voter cards were in place, the election did have a few low points including attempts being made by both parties to entice voters with cash and bags of rice, particularly before election-day. 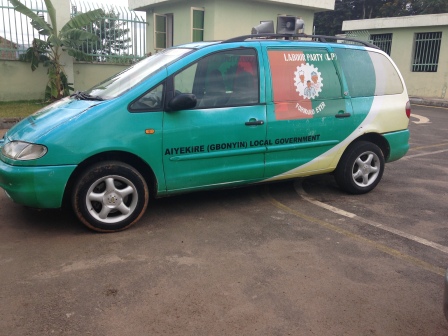 In the early hours of Sunday morning, INEC announced that the PDP candidate, Peter Ayodele Fayose had won the gubernatorial election in Ekiti State. He defeated incumbent Governor John Kayode Fayemi of the APC. Fayose received 203,090 votes, nearly two-third of the total votes cast. He also won in all the 16 Local Government Areas and 158 wards out of 177. The manner of the victory shocked most outside analysts and political watchers who never gave Fayose a chance of knocking off the incumbent. Governor Fayemi was widely believed to have performed his duties fairly well during his term– enough to earn him a second term in office.

Fayose`s victory also came against the advantage of Fayemi’s incumbency, the perceived dominance of the APC in the SW, as well as the endorsements by several high-profile individuals and groups, including the national workers body. Fayose`s triumph equally rankled political purists and all those who expected that his controversial tenure as governor of the state between 2003 and 2006 – particularly the corruption charges pending in the courts – would work against him.

In a rare display of sportsmanship, Governor Fayemi conceded defeat and personally congratulated Fayose, who pledged to work together with his predecessor. Fayemi’s response to the election has gained him accolades from Nigerian officials and the international community. However, there has been some anguish within the APC over Fayemi’s concession to Fayose. However, the APC has not publicly stated its desire to contest the results.

The elections in Ekiti went peacefully, but with a strong military presence. Days before, APC governors from neighboring states were denied entry into Ekiti to campaign for Governor Fayemi.  The military stopped them because of “security reasons.” And therefore the question remains, how free and fair can these elections be when the polling stations are surrounded by soldiers who are loyal to the government?

Leading up to the Ekiti elections, IRI held several events to assist political parties in preparation for the gubernatorial election.  IRI worked with over 600 political party agents to enable them to understand and comply with the election laws and to observe the electoral process.  In addition, IRI also held a campaign management training to help parties develop and communicate their platforms and messages to voters. In response to this workshop, IRI developed a Manifesto Radio Hour to provide an opportunity for parties to addresses various issues and allow callers to interact with party officials.

← And the peace of God, which surpasses all understanding…
My Dad would be so Proud! →