Posted on December 22, 2014 By fredayinafrica 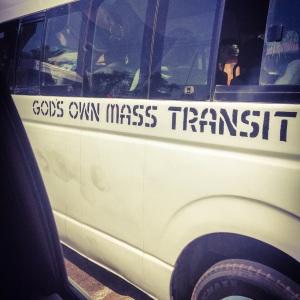 A mini-bus on the road from Enugu to Lokoja. I wanted to make sure I captured the name on this bus.

Driving in Nigeria is quite a challenge.  Of all the places I have been in the world, Nigeria is probably one of the worst (and most challenging).  India was bad because of the traffic but I remembered people followed a particular traffic pattern and there was “some” road rules.  The same can be said of East and North Africa, there were some rules to the road.

In Nigeria, it’s not uncommon for you to meet a car heading in the opposite direction in your lane, even on a four lane highway.  And whenever there is traffic, Nigerians use the median and shoulder to get around, causing additional headaches as the traffic is inching along.  Nigerian roads are extremely dangerous and there are countless examples along the roads of tragedies that have already taken place.  This weekend, we were traveling between Anambra State and Enugu State when we encountered a traffic jam.  We were descending down into a valley before you enter the capital city of Enugu when all of a sudden traffic came to a halt.  We inched along until we were upon an accident that had just occurred.  I assumed it had just occurred because sadly there were bodies scattered around the scenes.  Injured ones and those who were presumed to be death.  A young boy laid across the back seat, dangling from the rear door.  It was a gruesome scene and one that has replayed in my mind since that moment.  On Sunday, as we were driving back to Abuja, there was another crash, this time, a mini bus ran off the road into a small ravine.  People were rushing down to rescue lives but once again, it was obvious that a few people would not be reaching their destination that day.

During last week’s journey, I was a reminded how dangerous the roads are in Nigeria.  There is no way to end car accidents but as a country, Nigeria doesn’t even have speed limits.  There are no signs posted along the road telling you to slow down or a curve is approaching.  I have to believe that by enforcing some common sense laws, car crashes would decline slightly which would result in saving lives.  As Nigerians say, thank God for journey mercies.

← A Prayer for South Sudan…
The Abuja Airport Strikes Again… →