Posted on February 17, 2015 By fredayinafrica 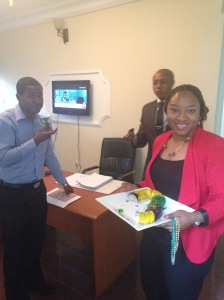 Well…a year ago, I was planning to make my return to the Gulf Coast to celebrate Mardi Gras. I had it all planned out but along the way, my return to East Africa never happened and instead I was sent to Nigeria to work on programs in the lead up to the General Elections. Sadly for me, the General Elections were scheduled on February 14, the Saturday before Fat Tuesday. So, I had to change my plans and disappoint people,  which I really hate to do. And on February 9, 2015, the Election Commission in Nigeria delayed the elections until March 28…if only I could see into the future.

So instead of walking around with my head hung low, I decided to introduce my Nigerian colleagues to our annual celebration of the period before Lent. It was rather funny as they were completely clueless to the beads, moon pies and my homemade king cake. It was difficult making the King Cake as it is hard to find sour cream in Nigeria. So, thanks to Google, I made an imitation sour cream with powder milk and apple cider vinegar. My knowledge of food has grown on the African continent because I am unable to get items like sour cream and butter milk. I have had to find ways  of creating my own version of these items. So far, things have turned out well. So as they say along the Gulf Coast, Laissez Les Bon Temps Roulez!

Thanks to my wonderful mother who shipped me three boxes of moon pies! Without her help, there is no way I could have had a Mardi Gras celebration in Nigeria.