Confederates in the Closet!

My mom is in the early stages of planning a family reunion (or shall I say ‘WE’ are planning a family reunion) and she wanted to make a trip to Monroe County, Alabama. My maternal great grandparents migrated to Mount Vernon, Alabama in the 1920s from Monroe County. As my grandmother told the story, her father Andrew came to Mobile County looking for work. The entire family followed him a year later. My great grandmother and her nine children boarded a steam ship at Claiborne and traveled along the Alabama and Tom Bigbee Rivers to the Mobile River and finally to Mount Vernon. 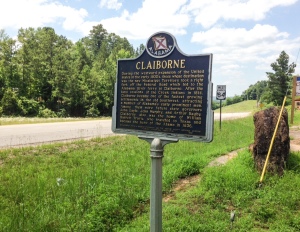 The historical sign that explains the significant of Claiborne. Claiborne was an important stop along the old federal road that ran from Washington, D.C. to New Orleans. In Claiborne, travelers would take the ferry across the river to continue their trip.

The entire journey took them nearly two days. It took us (my parents and I) just shy of two hours to make the journey to Finchburg/Wainwright, Alabama. After reacquainting ourselves with ancestors who paved the way for our family, we started the trip back to Mount Vernon. Along the way, I told my dad that some of his ancestors and relatives were buried along Highway 84 between Monroeville and Grove Hill Alabama and that we should stop in and visit the cemetery.

It was initially difficult to locate the cemetery but thanks to the World Wide Web, I was able to find a posting online that provided instructions on how to locate the cemetery. Here is where the story gets interesting. The relatives that we were trying to locate were not necessarily the relatives who wanted to know we existed. My parental second great grandmother Emma was the descendant of a slave and one of the sons of Lewis Bryan Bush, the owner of a plantation in Marengo Country, Alabama. While I am sure the Bushes never fully integrated Emma into the family, she was listed on the 1870 U.S. census as “Emma Bush, Domestic” in the Bush household.

A copy of the 1870 census listing Lewis Bush, his wife Mary and his three daughters. Emma is listed as a “Domestic” in the Bush household.

A few years later, she married my second great grandfather Allen Barnes and moved to Washington County, Alabama. Boaz Bush, Emma’s father eventually served in the Confederate Army during the Civil War. After the war, he married Amanda Hudson and settled in Clarke County where he worked as a physician. Boaz and Amanda and Emma and Allen both went their separate ways. Thanks to Ancestry.com, I have been able to trace our family back to the Bushes and even back to the European continent. Boaz’s heritage was English and German. My eight great grandfather, August Hermann Francke was a German Lutheran clergyman, philanthropist, and Biblical scholar. Can you imagine!

I copied this photo from August Francks Wikipedia page. He was born in Germany in 1663 and died in 1727.

As we arrived at the Gosport Baptist Church or the Gosport Methodist Church, depending on your Christian denomination, as the two churches share the same property, a second truck pulled in behind us. We exited our vehicle and started to roam the cemetery. But it didn’t take us long to stumble upon the Bushes. The graves consisted of Preston Randolph Bush and Kendall L. Bush, sons of Boaz and Amanda Bush and several of their children. Just as I started to take photos, the man in the truck walked up and told us, “these are my relatives, I’m a Bush.” At that moment, we all froze. We didn’t expect to meet a “cousin” while out visiting the cemetery and especially a white relative. My dad started to engage the man who had a very thick accent and looked as he had just concluded some form of manual labor in the 90-degree heat. I was deathly afraid that my dad was going to say, “these are my relatives too!” Instead he said, “We are from Mount Vernon, Alabama. Do you know where that is?” The man joked and said, “Naw, I don’t know where that is.” After we all laughed, some of us for other reasons, my dad said, “We were just passing through and saw this well-manicured lawn and just stopped in to walk through the cemetery. The man, holding a pitchfork and chemicals to kills ants began to tell us about the church and the cemetery. He gave us a history of the cemetery and told us that his father, William Adlai Bush was buried in the plot with his father Preston and his mother Harriet. My dad began to walk around and whispered to my mom, “I don’t think we should say anything about being related.” He also told us that the two churches had a total membership of six – three at the Baptist Church and three at the Methodist church. He went on to say that all of them are related and each attends each other’s church. He said, “We all serve the same God, Baptist, Methodist, Presbyterians. However, Catholics are different. “Even those people over there that worship Allah serve the same God.” His statement, along with his accent made me chuckle.

After twenty minutes, we ended the conversation and decided to head back to Alabama. As we were leaving, he said, “Y’all come back and the next time, bring some money for the churches.” We got in our car and immediately started to laugh. Each one of us thought that the other would reveal to Mr. Bush why we were out in the cemetery. We laughed the entire ride back to my parent’s house.

The Alabama River at the Claiborne Lock and Dam in Monroe County, Alabama. This is the location that my great grandmother boarded the steam ship for her journey to Mount Vernon, Alabama.

I feel bad that I didn’t probe him for questions but I was not sure how to approach the subject without revealing why we were there. And, I think Mr. Bush knew who we were (not us personally but the Barnes Family). I have had other Barnes relatives make outreaches to the Bushes only to be turned away. We were concerned how he would feel if we reveled that my dad was his second cousin twice removed. The two of them shared the same ancestor-Boaz Bush. The fact that he was holding a pitchfork didn’t help the situation either!

The American south is littered with stories of white slave owners having children with their slaves. This situation repeated itself in other branches of my family tree among my dad’s ancestors and my mom’s ancestors. These advances were mostly unwanted but a slave was viewed as property and had no rights. Tabby, Emma’s mother was victim of an unjust system that classified human beings as property. However, the Mr. Bush we met in the cemetery shouldn’t carry the sins of his ancestor and we are not looking for our inheritance. I just wanted to gain a better picture of the people whose genes I carry.  I have spent the last 17 years researching my family. Long before census records were on ancestry.com, I was in dark basements of museums and library piecing together our family history. It has shed light on our behavior and on our resilience as a family.

← America’s Uncomfortable Legacy of Race…
Go Ask your Grandparents, They will tell You that You are from Nigeria! →

6 Comments on “Confederates in the Closet!”