“Some people come in our life as blessings. Some come in your life as lessons.” – Mother Teresa

Posted on September 30, 2015 By fredayinafrica 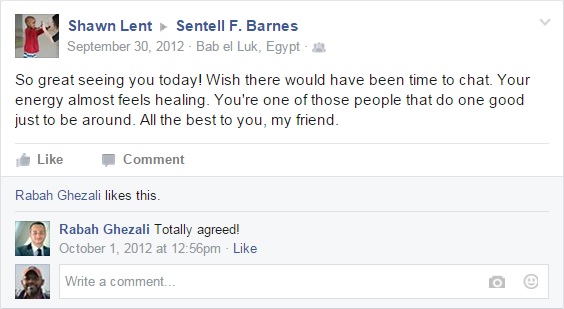 This morning, Facebook reminded me of this post by Shawn Lent. Three years ago, I was in Cairo, Egypt with the United Nations Alliance of Civilization (UNAOC) fellowship program. The UNAOC fellowship aim is to enhance mutual knowledge and understanding between peoples and societies from Muslim-majority countries in the Arab World, Europe and North America. The program was brought to my attention by another friend, Rabah Ghezali. 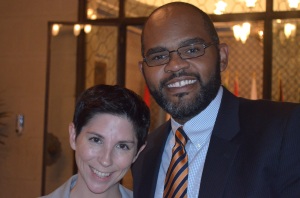 Shawn was living in Cairo where she was completing a Fulbright scholarship. When we met in 2008, she was teaching dance in Chicago. I met Shawn and Rabah in the fall of 2008 when we were selected to participate in a British Council program called Transatlantic Network 2020 (TN2020). The network brought together young North Americans and Europeans to address challenges of our generation. The program was brought to my intention by my roommate at the time. He said that he had come up with a way for the two of us to “see Europe.” I applied and waited for a confirmation. The first response from the British Council was letting me know that I had not been selected for the fellowship. While initially hurt for not making the cut, I drafted a very nice response and thanked them for their consideration. However, 24 hours later, I received an email inviting me to participate.

I will never forget the first time I had a conversation with Shawn. We were on a bus traveling from Belfast to the Wicklow Mountains and we happen to be seating partners. In the three hours’ drive, Shawn and I talked religion (as I was reading a book at the time called Disciplines of a Godly Man), race, politics, dancing, and smoking among so many other things. While we had differing opinions on some of the topics, I really enjoyed chatting with her and listening to her insightful responses. There are some people you met who you just know are destined to do awesome things. Neither one of us realized at that moment we were preparing for an interesting journey that would land both of us on the African continent and a random reunion in Cairo. Thanks Shawn for the beautiful compliment two years ago (and Rabah for agreeing with her comment). Glad that Facebook and other opportunities have allowed us to stay connected over the years.

← The Devil Must Be Beating His Wife…
Boko Haram targets Abuja… →