Posted on January 15, 2016 By fredayinafrica

It’s been hard waking up since getting back to Nigeria. Maybe I am still trying to shake jet lag or maybe I just miss being in the United States (mixture of both). For two weeks, Sheila and I crisscrossed Alabama, Georgia, South Carolina, North Carolina, Virginia, and Maryland visiting family and catching up with friends. It was a whirlwind tour for Sheila as it was her first trip to the US and the dreaded – meet the family visit. 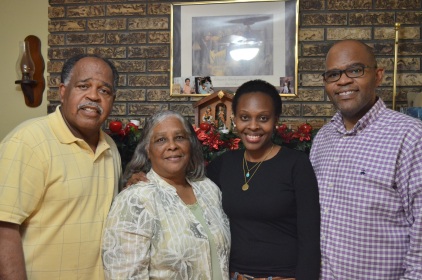 L to R:  Sheila and I with my parents in Mount Vernon. Sheila riding the four-wheeler with my cousin Kayland. Sheila and I at the “loveliest village on the plains.”

I warned her on many occasions that accents in the south are very thick and difficult to understand. I admit I have some difficulties understanding my southern brothers and sisters since being away from Alabama for so long. The Saturday before Christmas, my cousin Truly and I were traveling back from Baton Rouge, Louisiana and stopped at a fuel station to fill up. When I went in to pay for gas, the woman had such a strong southern/Cajun accent that I was completely confused on what she was saying. I smiled, paid for fuel and hoped I wasn’t being disrespectful by not responding to her comments.

I think Sheila experienced several of these occasions but like any confused person, you smile, nod your head and hope there are no follow up questions. When you go out to eat in the US, there are numerous decisions that you have to make even before you order your meal. Just ordering your beverage overwhelms you – large or small, hot or cold, ice and/or lemon, etc. Sheila also found out the hard way that chips in the US means potato chips and not French fries. This situation came up a few times during our adventure.

I could say that the U.S. overwhelmed Sheila but to be honest, we were overwhelmed with American shopping malls (boy how I miss a good old shopping mall), swallowed by the enormity of New York City and amazed by the train whistle that we often hear in American movies (that was more Sheila than myself). Despite the fact I have ridden Amtrak trains before, I am always amazed at how much more comfortable it is to travel by train than by plane. Sadly, the US has ignored the benefits of train travel and only the northeast is easily accessible by train.

Sheila and I made a trip to Rwanda to visit her friends the Mugishas (left) and my college friends (right).

The fact that we were both overwhelmed in the US is best illustrated by our last day in Washington, DC. We had a packed schedule when we awoke on January 2. Our first stop was a quick run to the large box store, Target in Seven Corners, Virginia. It was my first visit to a Target-like store since my arrival in the U.S. I needed to pick up medication and other supplies to take back to Nigeria. We made a mad dash through the store and were then off to meet my friend Dave Young for breakfast. Dave Young is one of my favorite individuals to catch up with and it is always hard for me to end conversations with him. He always seems to ask the right questions about my spiritual life and how I am surviving Nigeria. The conversation always ends with a spirited discussion about American politics. After an hour and a half with Dave, Sheila and I were off to do more shopping. It was now noon and we still needed to pack and drive the 40 miles to Dulles airport. Our United flight to Brussels, Belgium departed at 5:55pm and I was estimating we needed to leave Washington, D.C. by 3:00pm to have adequate time to check-in for the flight. However, we continued to run around D.C. picking up items requested by family and friends and items for my office. We got back to the house at 2:15pm and had only 45 minutes to pack. However, when 3:00pm came, we were nowhere near departure and I was starting to panic.

At 3:40pm, we were finally ready to leave D.C. and head off to the airport. I was trying to convince myself that we were going to make it. But flying out of Dulles is never really easy and the security line is often long and chaotic. I prayed, not that we would arrive in time for our flight but that God would grant me peace with whatever happens when we EVENTUALLY arrived at the airport. If we missed the flight, I would be ok with missing the flight. At least we would be in Washington, D.C. I knew that we also had to return the rental car and then check-in for our flight so I kept saying to Sheila, “only one of us will catch the flight because there IS NO WAY we could RETURN the car and navigate the security process in the airport.” I was preparing myself for the worst-case scenario – one of us missing the flight – ME. 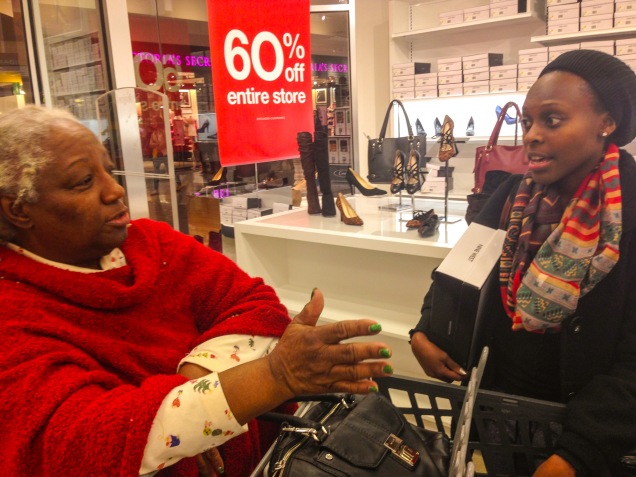 You cannot go to the U.S. without visiting our monuments to the ‘free world.’ The U.S. Capitol is one of my favorites tours in Washington, D.C. I love rediscovering the Capitol each time I enter the historic building. We were joined by Sheila’s cousins Mark and Marvin who were also spending New Years in D.C. The bottom photo is of Sheila and my cousin Cathy. We randomly ran into Cathy in Arundel Mills mall. It was so great to see her.

We arrived at the airport at 4:30pm (once again my superior driving skills save the day). Unsure if I had enough time to return the car and catch our flight, I parked the car in the hourly parking lot unloaded our mountain of luggage and off we ran to the terminal. I put the car key in the middle console and left the rear driver side door unlocked. As we darted into the terminal, I called my friend Jenny Martin and asked her if she would be willing to come to the airport on Sunday and return the rental car. Because Jenny is such an AMAZING friend, she agreed to come to the airport and return the car. We then joked about whether the car would still be in the parking lot on Sunday. (Thankfully, the car was still in the parking lot on Sunday). 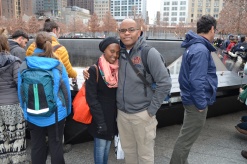 Our prayers were answered as the United desk was free and we were able to proceed to the desk. There were a few challenges checking in but after 10 minutes, we were on our way to the security line. We arrived at the gate just as they were calling for zones to board the flight. Because of my gold status with Star Alliance, Sheila and I were able to board the airline first but we were then presented with our next challenge. I was given a new boarding pass to upgrade to business class. I typically only fly United in hopes of snagging an upgrade. But most times, my hopes of grabbing that “golden ticket” are dashed. Sheila was not upgraded because our tickets were purchased separately because we were flying from different destinations. I tried to convince Sheila to take the upgrade but she didn’t want to take it (who doesn’t want an upgrade to Business class. Clearly the passenger boarding behind us was all too ready to take the upgrade). 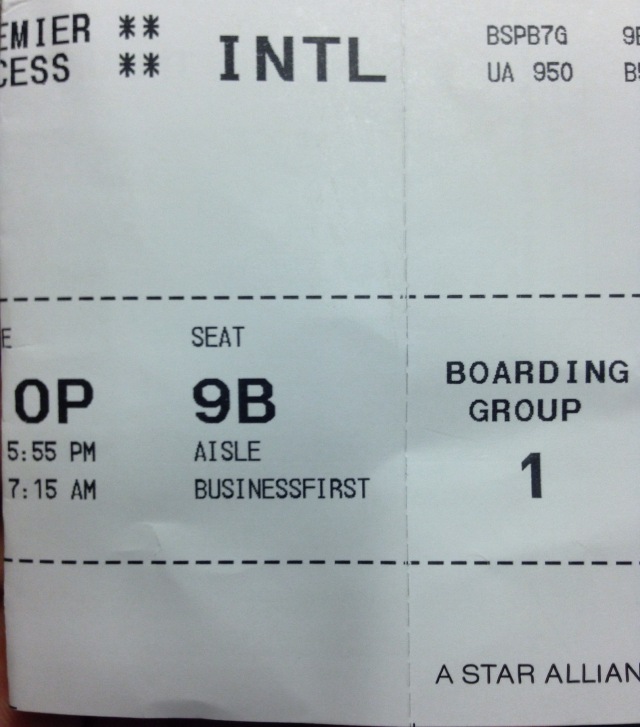 I tried negotiating with United to allow me to purchase an upgrade for Sheila but was told that they were unable to process the upgrade on the plane. Another flight attendee approached me to inquire about the nature of my problem. I told her that fiancée and I had been separated by my upgrade and I was trying to get her a seat in Business Class. She smiled and said, “That’s very sweet of you.” I then asked her, “What would you do in my situation.” She laughed and told me good luck. I approached Sheila to discuss my options but her seat neighbor kept chiming in with, “I’ll take the seat.” I went back to Business Class to consider my options. It didn’t take long. When I was booking our tickets to the United States, it was difficult ensuring that Sheila and I could be on the same flight. The airlines that fly into Abuja are not the same airlines that fly to Kigali. So, there was no way we could easily travel together. For us to be on this plane, it required me to fly to Brussels, spend the night and then fly to Abuja.  Why would I go through all this trouble and not sit next to Sheila. I decided to give the upgrade to Nathaniel, who was sitting next to Sheila. I told Nathaniel that “today is your lucky day.” He said that he was traveling to Freetown to bury his father. So, it wasn’t his lucky day. But I told him that I hoped the seat would be a blessing to him as he was grieving his father. And like that, Sheila and I settled in for our 7.5-hour flight to Brussels and an end to our United States adventure.