So you are telling me there is a country that is run by black people!

A few nights ago I was having dinner with a government official and we were discussing the state of his political party and the future of South Sudan. We were discussing his background and where he was during the civil war. He told of how he was forced into the army at 13 and how his village was razed to the ground. I was fascinated by his perseverance and his optimism for the future of South Sudan. He then told me of a trip to the United States a few years ago.

He was in Baton Rouge, Louisiana where his son was receiving medical treatment at a local hospital. One night, he and his wife decided to walk over to McDonald’s for dinner. They were approached by a black woman who had seen them walking around Baton Rouge earlier in the week. The woman inquired into where they were from because “they didn’t look like they were from Louisiana.” He informed her that he and his wife were visiting from Sudan (at the time, South Sudan was still part of Sudan). She informed the couple that she had never heard of such a place and asked where Sudan was located. When he told her it was in Africa, she hesitated for a moment and then asked, “So you are telling me there is a country run by black people?” She was amazed that in Africa, the black people are in charge of their own affairs. Being from the South, I laughed at this story but then he asked about Americans’ knowledge of geography, especially the African continent.

America’s isolated location in the world has allowed us to become an example of stability. However, that isolation has also contributed to our lack of knowledge and understanding of what is happening throughout the world. National Geographic conducted a geography surveyed of 18-to-24 year-old Americans a few years back and discovered that only 37 percent could find Iraq on a map. Since 2003, the situation in Iraq has been discussed non-stop in the American media and in current event programs.

I am always amazed with how much people outside the United States know about our government, culture and current events. I recognize that a lot of that knowledge comes from Hollywood and current events. This past weekend, I was presenting at a workshop with students and young adults about political parties and comparing the system in the U.S. to South Sudan. The students were able to guess that Abraham Lincoln was the first Republican President (after I gave them the hint that Lincoln is credited with freeing the slaves), recognized Karl Rove in a photo with George W. Bush (I told them that Karl Rove got his start as a university student working for the College Republicans) and could give me a play by play analysis of the 2012 Presidential election. I was a little taken aback by their knowledge…

At the end of the event, one of the students asked what examples South Sudan could take from America to become a stable and strong country. I told him first, the country must be patient, because the American Democracy is still a work in progress. America is still correcting the wrongs of past generations. In addition, I told him that South Sudan needs a constitution that, in the words of Thomas Jefferson, grants citizens life, liberty and the protection of property. It is extremely important that a country protects its citizens and their property. Finally, I told him that South Sudan needs institutions that allow citizens to settle disputes in a civil way and not through violence. In some parts of this country, there is lawlessness because South Sudan does not have the institutions in place to deal with violence and crimes. A trained military and police force would help move this country closer to a more civil society.

Here are a few pictures from the workshop. 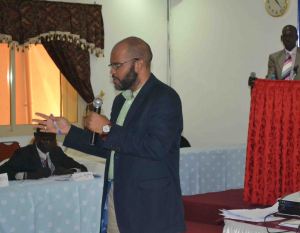 ← A View of the Neighborhood!
New Pictures from Juba →