Dancing the Night Away at the 2015 Marine Corps Birthday Ball…

Posted on November 15, 2015 By fredayinafrica

I have come to NOT enjoy traveling within Nigeria, especially when it comes to flying. And it’s not for the obvious reason – concern for airplane maintenance. It has to do with a lack of consideration for my time…and not just MY time but for the time of all airline passengers. The most notorious of the airlines is Arik. It’s so bad that if you talk to anyone in Nigeria, they will tell you to consider any of the other airlines. And some locations are worse than others. A few weeks ago, I was flying to Port Hartcourt, a city in southern Nigeria on the Atlantic Ocean. My flight was supposed to depart at 4pm but instead left at 5:30pm. On the return trip, it was supposed to depart at 8:40am. When I checked in, I was told that it would depart at 9:40am and once I entered the waiting area, was told that it was now scheduled for 12:40pm. I spent the entire day waiting in the airport before finally landing in Abuja around 2:00pm.

I found myself in a similar situation on Friday…but this time, I didn’t have the luxury of waiting all day in the airport. While I was stuck in Sokoto waiting for my plane to arrive from Abuja, Sheila was arriving from Kigali because we were attending the Marine Ball at the Hilton. The question should be, why were you in Sokoto when you knew Sheila was arriving from Kigali? Great Question…

On Wednesday evening around 9:30pm, I received a call from one of my staff informing me that the Governor of Sokoto (who is also the former speaker of the Nigerian House of Representatives) has agreed to meet with IRI on Thursday at 2:30pm. My staffer could tell that I was not happy as Sheila was arriving on Friday and he knew how I felt about traveling in Nigeria. After about an hour of debate (with my colleague and with my inter-self), I relented and told him lets book airline tickets to Sokoto. On Thursday we jetted off to the airport only to experience a very brief delay. It turns out that the Governor of neighboring Kebbi State was on our plane and we had to wait on his entourage to board the plane (again, why I hate traveling in Nigeria). We arrived in Sokoto and had a very good meeting with the Governor of Sokoto. He spoke highly of IRI and the work we are doing to expand women participation in the electoral process. On Friday, we gathered in the lobby of our hotel only to discover that our 12:30pm flight had been pushed back to 1:30pm. The Aero Contractors flight was originally the first flight out of Sokoto but now, it was the second flight out and there was not another flight (if this flight was canceled). I debated with my staff on what to do and in the end, decided to wait for our flight. At the same time, Sheila was arriving in Abuja. I organized transportation for her and sent her to my house to rest. Finally, at 1:45pm our flight departed Sokoto and landed in Abuja around 2:30pm. Luckily there was just enough time for me to race home, greet Sheila and get ready for the Marine Ball. 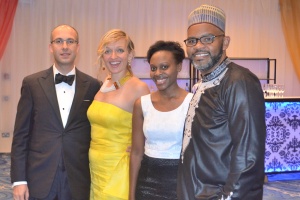 James, Audra, Sheila and myself at the Marine Corps Ball

We were both excited about the Marine Ball because it was like going to Prom (a first for Sheila). We both had special outfits created for our first big social event. I went for the Nigeria “Big-Man” look and Sheila went for the always modern and classy black and white. We had a great time dancing the night away and were joined by my good friend Kury Cobham. Kury and I attended the 2013 Marine Ball in Juba South Sudan. 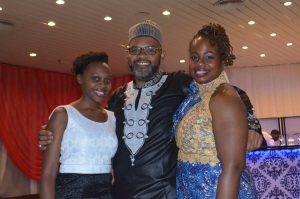 Sheila, myself and Kury at the 2015 Marine Corps Ball

← Well…You Are Dressed Like a Nigerian!
My “Black (Happy) Friday…” →