A Symbolic Return to the “Point of No Return”

One of the things I have enjoyed most about being in Nigeria is the ancestral connection that I have with this country and West Africa. Despite the disorganization and chaos, the daily power outrageous and the lack of adherence to the rule of law, as a black American, there is an deep familiarity to this wild and crazy country. This week, my parents and I ventured down to Badagry, Nigeria, a former major slave port and an important entry point for Christianity in Nigeria. A slave market was opened in Badagry in 1502 by the Portuguese and lasted until the town abolished slavery in 1886. 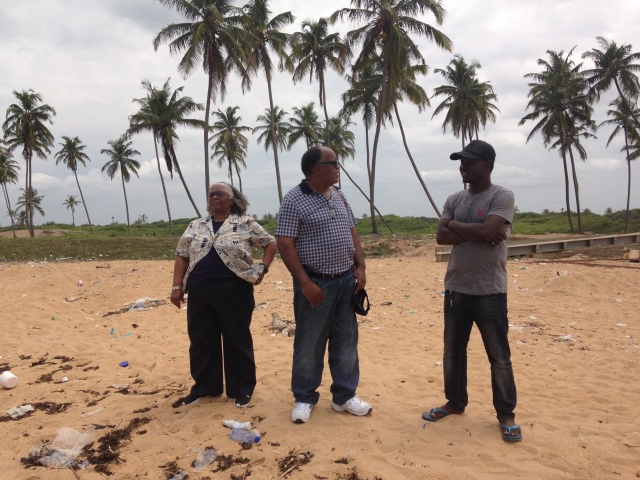 My parents (along with our guide Adewunmi) at the ‘point of no return’ on Coconut Island. We were facing the Atlantic Ocean.

It was a sobering tour of a dark and complex time in world history. For a long time, I blamed European colonial powers for the spread of slavery but when you start studying the background of African slavery, you soon realized that tribal chiefs and other leaders were also culpable in this horrific institution. After tribal wars, the defeated men and women would be sold to European masters for umbrellas, alcohol, weapons and gems (Can you Imagine!).

Badagry is also the site of the first Christian church. The tour guide explains that it was under an Agla Tree that Christianity was preached for the very first time in present day Nigeria by Thomas Birch Freeman and Henry Townsend in 1842. The tree was toppled during a storm in 1959. The town has since erected a monument to the Agla tree. It is also strange to think about the entangled web that ties Christianity to slavery. In most cases, slave masters used Christianity to force slaves to be submissive and to explain why this unfortunate event was happening to them.

A cross at the Agla Tree Monument in Badagry.

One of the most moving aspects of the tour was the trip to the slave port. The slaves were taken to the port to be transferred to Coconut Island where they would board the slave ship. This island is also became known as the “Point of No Return.” My parents and I took a boat across the lagoon and started our slow and arduous march across the island. The trip is actually a very easy walk through a sparsely populated landscape but there is no shade from the unbearable sun. The sun felt as it was sitting on our shoulder…and eventually became too much for my mom. But it was a very small (VERY TINY) exercise of what our ancestors experienced as they were marched to the slave ship (However, we were free to move it our own pace and were not tied to each other). 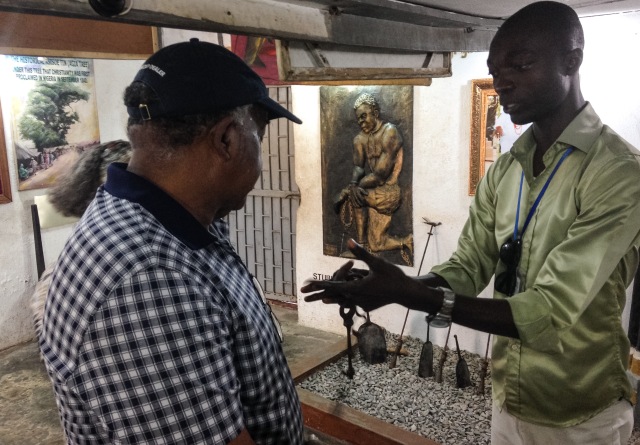 One of my favorite tour guides was at Chief Mobee’s Compound. He made the tour of the very small museum interactive and educational.

The only downside to our visit was the organization at the slave museums and sites. While it was much more organized than most attractions in Nigeria, it left a lot to be desired. There was so much more that some of the tour guides could have provided us about the community, the slave trade and Christian missionaries. When I was giving tours of the U.S. Capitol, I made a vow that on each tour, I would introduce something new to my guests. So each night I read up about the Capitol, interesting politicians that had come through the building and other facts that were happening in and around Washington, D.C. I became so good at my tours that other offices were requesting for my assistance in giving tours. This obviously was lacking on many of the tours we took at Badagry but all in all, it was a great tour and I am so happy I was able to take my parents. They really enjoyed it and had a hands on experience of the cruelty of slavery.

Once I finishing strengthening democracy in Nigeria, I will focus my attention to the tourism industry.

The First Primary School in Nigeria is located in Badagry. It was founded in 1845.

← A Trip to the Ancestral Homeland
Cows and Weddings in Rwanda… →