Cows and Weddings in Rwanda…

Posted on June 2, 2016 By fredayinafrica

For Americans, a wedding cake is an essential item for your wedding day. For a Rwandan, it’s a cow. Cows are an important commodity in Rwanda and no wedding happens without the trading and bargaining of cows. I knew that when I started dating Sheila that if we decided to get married, there would be traditional activities and ceremonies that would take place. I remembered many of these activities from when my friend was married in Rwanda in 2010. In February, I started the traditional activities when I traveled to Rwanda for the Gufata Irembo ceremony.

I was made aware of this ceremony in January when Sheila told me that my family was supposed to approach her family to declare my intentions to marry her. We both knew that it was highly unlikely that my family would make two back-to-back trips to Rwanda. Not to mention the fact that my dad, uncles and cousins would have no clue what they were doing.  (That would have been amazing to watch). So Sheila and I (along with her mother) solicited a few upstanding Rwandan men to represent me to Sheila’s family. During the ceremony, my representatives negotiated with Sheila’s family for her hand in marriage. After a spirited debate, her family accepted and we could now plan the next ceremony, the Gusaba. To make sure I would be the one and only suitor for Sheila, my family representatives made a promise of cows. Never mind the ring on Sheila finger!

To an outsider’s ear, the promise of cows for my future wife may sound strange, but cows are an important resource in rural Rwanda. Cows are a source of life in rural areas and considered an economic asset and a sign of wealth. For generations, cows were traded as wedding gifts from the groom’s family to the bride’s family.  When Sheila and I visited her grandmother in northeast Rwanda, not only did she offer me milk to drink but jokingly offered me a cow to take back to the U.S. Like many of her neighbors, cows equaled survival for Sheila’s grandmother.

This past Sunday, we participated in the Gusaba. Gusaba is a Kinyarwanda word meaning ‘to ask’ and is the ceremony where the family of the groom-to-be officially requests for a girl as a bride. It is the next step after the Gufata Irembo but happens before the religious wedding ceremony. The Gusaba is a fascinating event that includes all members of the community who come together to negotiate the marriage of the bride. The two families go back and forth debating why the bride or daughter should be release to marry the potential suitor. One Rwandan historian said that the in the past, “the Gusaba was a battle of wits, often involving traditional tongue-twisters as well as riddles and pranks from the girl’s side to test their intelligence and patience and it is on this day where whoever had a reason that should prevent the two from getting married would be given room to put it across.” 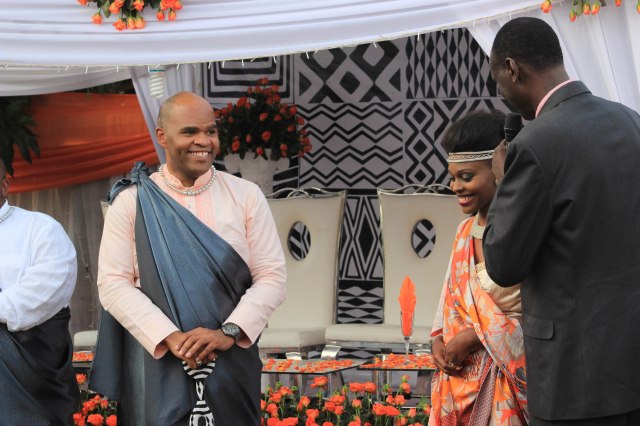 Sadly for me, my parents were not actively involved in the negotiations. Like me, they didn’t have a good grasp of the culture and the traditions. We were silent participants. However, we were represented and supported by upstanding members in the community who helped negotiate my marriage to Sheila. The men representing Sheila did ask some tricky questions and tried on several occasions to trip up my representatives but the men successful dodged the traps and won Sheila’s hand for me to take as my wife.

It was a beautiful ceremony and I am one step closer to having my bride as my life long companion.

3 Comments on “Cows and Weddings in Rwanda…”