Another Airport Story – This time Croatia!

Posted on July 1, 2019 By fredayinafrica 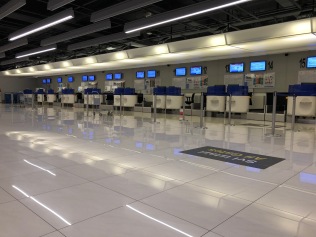 At about 4:30am, an airport worker approached the door to open it. The people outside flooded into the airport but there were no men or women sitting behind the check in desks. There were a few kiosks for checking into your flight but when Sheila and I tried to check in the kiosks told us we needed to see an agent. So we moved closer to the check in desk and I sat against a pillar in the middle of the hall. Before I could look up all the westerners (mostly Canadians, Americans and a few Europeans) had formed a queue at a random desk. Now, the American in me wanted to join that queue. I appreciated the people for bringing some organization to a little chaos. But the five-year old Nigerian in me was thinking, “why are these people forming a random queue when we don’t even know what check in desk will open?” I whispered to Sheila, “so what’s going to happen is that when they open a check in desk, the people at the front of the line will demand that they have been queuing and deserved to be checked in first, even though we had all been in the airport the same time!”

Fifteen minutes after making this declaring the check in desks began to light up and the desk in front of Sheila and I was for business and star alliance gold passengers. Sheila and I quickly grabbed our bags and moved to the check in desk. A family that was queuing at the front of the line enter before us and declared that those in the former queue should be given preference. I laughed out loud and looked and Sheila and gave my familiar “these folks are crazy stare!” We entered behind the family with little to no reaction to his declaration. You can’t form a misdirected queue and then try and direct traffic. Thanks to our quick thinking (and a little Nigerian chaos in us) we were one of the first passengers upstairs and into the lounge.

So what’s the moral to this story…great question! As an old hymn says, I have met Nigeria and I will never be the same! So please forgive me if I offend you with wanting to be the first one off an airplane or desire to store my luggage anywhere on the airplane. I’m a product of my environment!